Tuesdays of Texture is a super cool weekly feature.  You can read about it over here; but the short version is I want to see a bit of your world so link up your post in the comments!

So.  I’m always whining about the amount of savage that we have to see at the Hardcore Country Life.  Just a few minutes ago manfriend took a salamander outside so I wouldn’t cover the room in TAT spray.  Because, to ensure that I won’t sleep in a room with a living salamander, I would spray the entire room.  I would spray my face.  I would pass out, but I would have peace.  (By the way, the huge one that I saw walking around in broad daylight?  Have two adhesive traps right where it was pooping, haven’t caught it yet.  Pretty sure it moved outside the room.  Or it levitates.)

Anyway.  When I was at my parent’s last month I remembered that over there we have our things too.  Actually, a salamander got into my shoes that were hanging from a gate, about my head and almost jump on me.  I’m sure life was laughing at that one.

And then one day we were going home when we saw this: 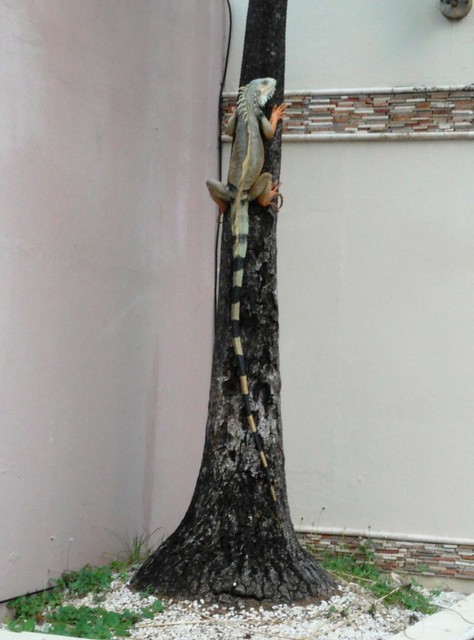 It was a spectacle for Baby J, who is currently very much into all kinds of animals, reptiles being among her top five.   I had to move my SUV as close as I could so she could see it.  My mom, who hates them iguanas, braved the monster and went outside to try to get it to move for Baby J, accomplishing nothing but a stern stare from the animal who only moved it’s head two mililiters to the left and then continued to be a statue.

Maybe the Hardcore Country Life is not that harsh after all.

Many thanks to all the very cool people that shared an image last week:

Retirement and Beyond by Joan

Have a wild day!  And do remember to share a bit of it with me!