The Hardcore Country Life can sometimes be filled with something of a dream-like scenery.  A mood taken out of a country life movie where the horses eat the grass peacefully on a hill, the cows graze the meadows and the skies are always clear blue.

Like a few weeks ago when a local TV program came to interview manfriend on his pioneering business enterprise —oh.  I haven’t written anything about that yet, I know.  I’m sorry I’m bringing it up without writing about it first, but honestly I have so many mixed feelings about the experience that I can’t get the right words out yet.  (That happens to me often.  I really have to digest things to spit them out correctly.)

I feel exhilarated, sad, exited, frustrated and destroyed by that event.  All of it at the same time and writing those feelings will come out like a crazy, wild ride that you might not be ready for.  Maybe you don’t read this blog to live that kind of gut wrenching emotions.  Maybe you just want to read about the awesome chayote salad I tried the other day.  It was awesome, I’ll share the recipe later.

Anyway, a crew of three people came to record a segment for a local TV program (on morning prime time.  Because that’s how we roll.) and when the producer got out of the car he basically lost his head with the views.  The first shots he arranged where ones with the hills and the horses and the pine trees in the blowing wind.  It was a camera jack pot.

But then that only happens what, like once every ten years?  Maybe five?  The rest of the time it’s filled with moments like the other day where I’m left with a punch to my nerves that will probably last me a lifetime.

I was with Baby J under a poinciana tree telling her to stop trying to climb it’s roots because I’m not Hardcore Country Life born and doing so looks like a very bad idea.  She’s ignoring my pleas as she sometimes does when she’s outside (she knows that outside play is where I let her go to town) when I felt something behind her.  I didn’t even saw it, I just felt it’s gaze. 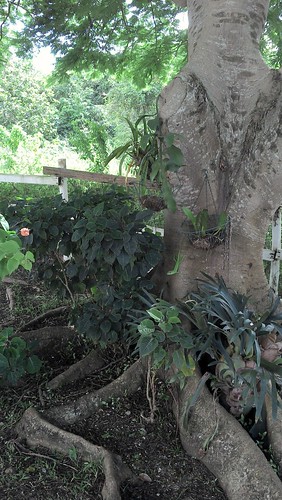 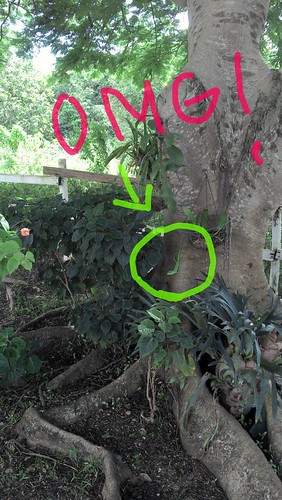 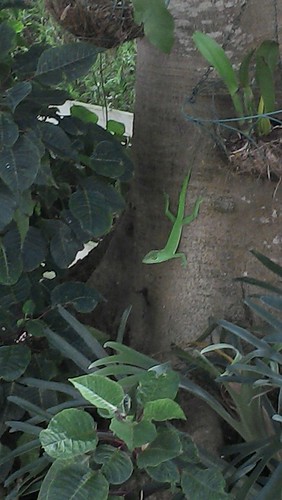 Yeah.  That mofo was RIGHT THERE.   I don’t even know what that is.  I’m a biologist not trained in Hardcore Country Life.

I called manfriend’s mother because she was closer but immediately regretted my choice because she’s… well, Hardcore Country Life raised.  You just never know what she’s gonna come up with.  Ever.

This time she started screaming and pulling her hair like the world was going to end while I raised my left eyebrow until it got lost in my hairline.

Apparently those lime green lizards jump?  Or fly?  Or probably eat people?   That’s what people in the Hardcore Country Life think.  I doubted this very much but still picked Baby J up and walked away a few safe paces to be on the sure side.  Manfriend on the other hand came very exited handling a broomstick to usher the lizard away (and also see if it indeed could fly) and take pictures.

I’m sharing this in the Look Up, Look Down Challenge.

And for the record, the poor lizard didn’t flew.  It had enchanting eyes though.