Manfriend’s father has a milk cow (or milking cow, I’m not sure what’s the correct term).  Her name is Toña.

She was pregnant and a few days ago he announced that after the birth of this calve, he was going to retire her from milking.  I assumed he meant he was going to sell her or eat her, as per usual in a milking farm, so I asked him which of the two he was going to do.

I could have very well asked if he was going to sell or eat one of his kids.  Everyone was outraged.  When he said he was going to retire her, he actually meant she was going to retire, millionaire style, eating grass and roaming about for the rest of her life.  It wasn’t my fault though, I had no idea Toña was more like a dog than a cow, I had never seen him milking her, he scratches her face.  HER FACE.  And then Toña had her calve, look at this cuteness: 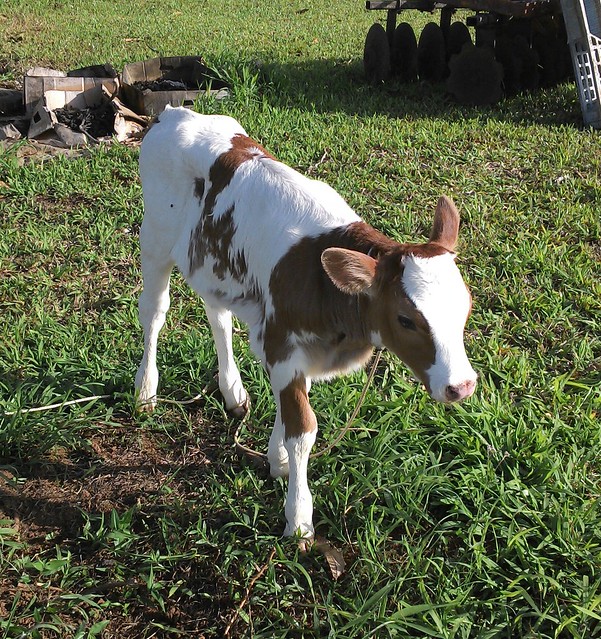 And my feet went into my mouth again because when cows have babies that are not going to serve any purpose they are usually sold or eaten, so  I asked which one of the two he was going to do.   I could have very well asked if he was going to abandon a newborn in a dumpster.  Everyone was outraged again.  It turned out this is going to be his next milking cow.

Her name is Tatiana.  She is a very spunky calve and already runs away when he approaches with a rope.  I don’t want to offend any cows, but I think this is one of the prettiest calves I’ve seen, ranking top five.  And I’ve seen a lot of cows.  She’s got us all pretty enamoured.