Every Tuesday I post a photo of a texture or the use of a texture and share a detail of my part of the world.

I invite you to join in the fun of sharing an image of the textures around you by including a link to this post in your own post (you don’t have to make an exclusive Tuesdays of Texture post!).  You can also @ naramilee in twitter or instagram if you want to share an image from either platform.

(Links to this post will automatically appear as ping backs.) 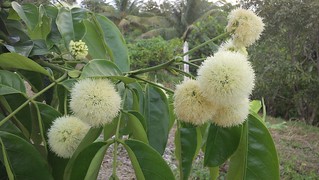 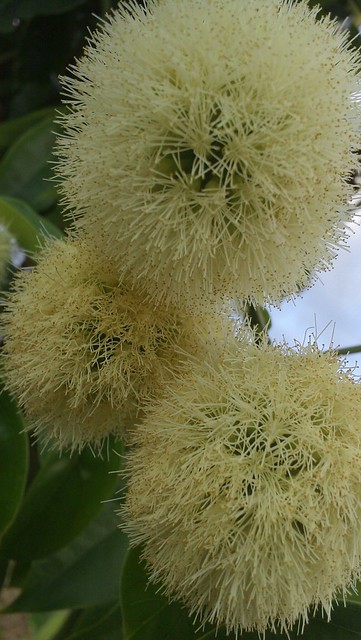 There’s a slope in a road in the town of Hatillo that’s dubbed “la cuesta del güamá” or güama’s slope.

I’ve asked everyone from that town if they remember a güamá tree ever being there and no one from that town has ever seen a güamá.  In fact, no one I know has seen one there, or anywhere.  They used to be everywhere or so I’m told by old people, but my generation doesn’t know them.

So the other day we see this tree blooming in manfriend’s father land and manfriend asked what it was because he couldn’t recognise it.  That never happens, manfriend is like a walking flora encyclopedia.  Manfriend’s dad tells him, very calmly, that it’s a güama.  Manfriend proceeded to freak out and run towards it like a kid in a Disney park.

In less that a year of plantation they are seeing this tree bloom.  It’s like a living miracle.

The puffs are going to disappear very soon and transform into flowers, which makes me want to share them now rather than later.

Speaking of sharing, lets go around and have a look at this beautiful contributions:

I love the colors and the light on Klara’s shot.

Debbie found a few lamp post that were yarn bombed!  I would love to see one of these things one day.

I don’t know the actual use of this bucket but I would have that in the middle of my living room just to look at it as much as I can.  #IGotMyRusticOn

Have a happy and textured Tuesday!