I have talked about how this house is surrounded by all kinds of animals.  Manfriend’s brother has three horses, there is a dairy farm close by and we can see the cows (well, we can see the bulls more than the cows, but who’s getting technical here).  Manfriend’s mother takes care of a red cockatoo and a blue macaw.  Fita visits everyone here.

But I haven’t mentioned Jack. 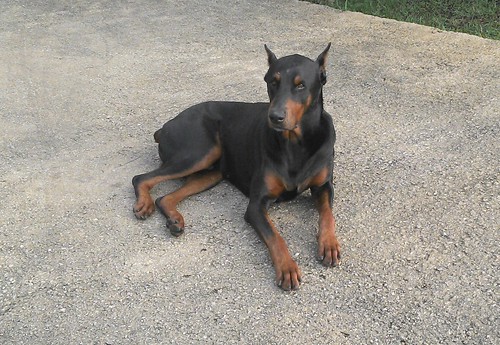 Jack came with the house.  Literally;  we moved here and he kept looking at us like “that’s my kitchen.  That’s my rug.  You are walking on my floor.  No, you can not touch my chair.  I’m not kidding.  But maybe you want to know how deep I bite?”  I imagine him saying that with a deep, sultry voice and a bit of English accent.

He is a dream of a doberman.  I had seen dobermans before but never had I seen one with the proper size and muscles, now I think all the ones I have met were underweight.  Probably because they can eat a house on a daily basis.   Seriously, that animal’s stomach has no end. 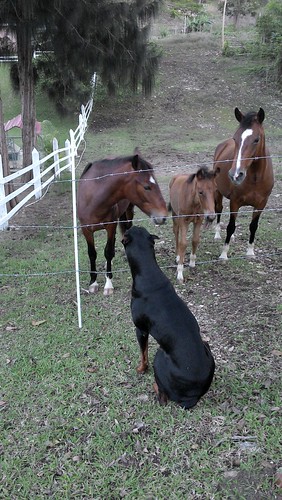 Well, Jack has become part of my days here.  I rely on him as I relied on Triunfo when I was back home.  Even though he doesn’t like me (I can pet him and give him food but the entire time he will look at me like “your offerings do not satisfy me.  You may try harder.”)  he protects this house better than a guard (he actually does rounds around the family’s properties, including manfriend’s business) and I trust him because he barks and bites.

Living here has given me the opportunity to see him in another light though, and my favorite thing about Jack is that he thinks he still a puppy.  He plays like a pup and he lays down and asks for his owner snuggles as if he was ten inches long and weighted  three pounds.  It’s the cutest thing.

Here he is posing for his photo and then you don’t see him because he jumped out of the frame to catch his owner who was playing with him. 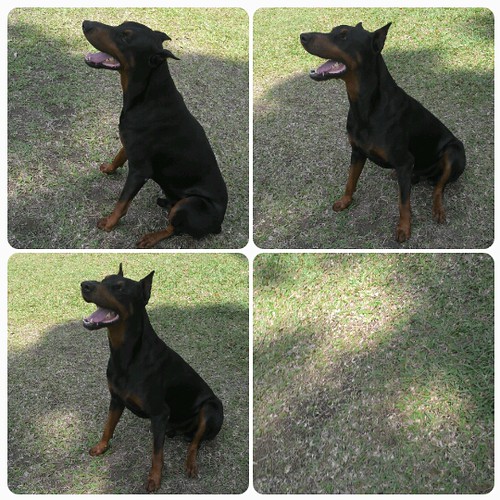 Lately Jack has been running up to my car as he does to his owner’s when he arrives and when we all travel together he waits in my door instead of manfriend’s as he did before.  He has truly won me over because he has started to sit in front of baby J when we are outside, which tells me that maybe he’s willing to snack on someone’s leg if they dare touch her.  In fact yesterday we had two men installing bars (additional bars mind you, because there’s never enough bars in Puerto Rico I’m told) and he parked himself in the receiving area while baby J played several feet behind him (I don’t allow her to touch him or play close to him because I’d rather be on the safe side).

A couple of weeks ago manfriend saw Jack’s firsts white hairs which means he will begin to enter the senior stage in a couple of years and I want to make sure he has a space where he is mentioned here because his place on our lives is as big as the one he has in this house.

Have a great day!  And pet a four legged friend if you can.