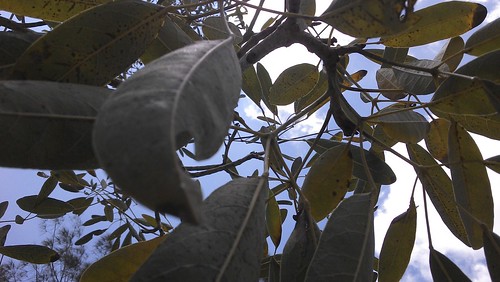 For the Look Up, Look Down Challenge Week 40.

Standing under an oak tree, absolutely terrified of a lizard jumping at me because of that time I sat on my car and a lizard jumped on me.

*searches in archives for link of post explaining how she almost died because a lizard jumped on her.   Can’t find.*

I never wrote about it?!  Maybe I didn’t had internet service at that moment, but still, ALMOST DIED.

Well.  One day, coming out of the grocery store, I sat in the driving seat of my car (it’s technically an SUV but I call everything car.  It’s not a sin, I checked) and a lizard fell on my left shoulder.

My hatred towards lizards and geckos has been widely documented here, but just to make it really clear before continuing, I HATE LIZARDS AND GECKOS WITH PASSION.  Enough that I can’t be in the same room with them.  Not to mention cars.  I can not be in the same car as them.

I know because when I saw it, I screamed, opened the door and ran into the street – coming traffic be damned-  to shake it off.  Two cars from different directions had to stop to watched me wrestle an invisible enemy.  I then ran into the grocery store again to ask the cashier to please check my back and my hair because a creepy crawly had fell on me and I couldn’t see if it was still hanging there somewhere.

Which would surely kill me of death faster than the upcoming traffic I had just evaded by cheer luck because, let’s all remember that people drive like maniacs in this town.  I defied logic.  It was like the Matrix, except I wasn’t nearly as polished as Nero and certainly didn’t had the smooth moves.

And since then I’ve been a bit more jumpy about one of them creepy crawlies falling on me.  Idiots.

9 thoughts on “Look Up, Look Down: And the leaves where falling, and thankfully it was all that was falling”